NASA is advertising travel posters to exoplanets! But we would have to wait a few more decades to get our technology there. NASA is giving out these exotic travel posters celebrating Kepler’s mission on finding its 1000th exoplanet (planet outside our solar system, which orbit other stars). Kepler’s mission was launched to find Earth-size and smaller planets that orbits other stars. At the discovery of the 1000th planet, NASA’s geniuses came up with this interesting idea of producing travel posters which have environment a little closer to Earth. So far, three potential destinations have been recognized.

This planet 44 light years away from us is twice the size and eight times the mass of the Earth.  It is also called the ‘Super Earth’. Given its higher mass, gravitational pull on this planet is much stronger which would hinder the blood flow in the human body. However, the higher gravitational pull promises a super exciting skydiving with an intense adrenaline rush. Scientists aren’t still sure what the ground of the planet is made up of. It could be a rocky surface or like the ones buried in thick layers of ice and gas.

The planet orbits two stars just like in the movie Star Wars. This means you would get to see two sun sets and two sets of shadows in here, just as the poster reads ‘Where your shadow always has company’. One drawback of this planet is its temperature is something close to dry ice (-78°C). Prospects of life, although not very good in here, scientists are assuming the planet could be a gas giant like Saturn in our solar system.

Kepler-186f is the first Earth sized planet found. Scientists consider it a potential ‘habitable zone’ where water could exist. The planet orbits around a much cooler and redder sun than ours. This means any plant life on its surface would have to rely on its sun’s red-wavelength light. Therefore, the planet’s grasses and plants would be red instead of green. As the poster makers have precisely put it, ‘Where the grass is always red on the other side’.

So the answer to question, “Where is your next travel destination?” will encompass new planets and new suns is not too far in the horizon. 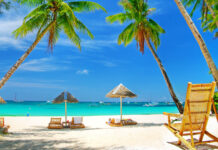